Home / About Us / Board of Directors

The Muurrbay Board of Directors consists of seven Gumbaynggirr people, including Chairperson, Treasurer and Secretary. It is the responsibility of the Directors to provide guidance to Muurrbay as a Language Centre and Registered Training Organisation, and the activity Many Rivers Aboriginal Language Centre.  Directors’ meetings are held quarterly.

Muurrbay Directors are as follows:

Blake, a Dhanggati/Bundjalung woman, is a new member of the Board. She completed the Certificate III in Gumbaynggirr at Muurrbay in 2018. 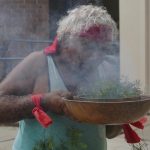 Uncle Martin is one of Muurrbay’s directors . He has worked tirelessly on issues regarding Indigenous affairs in the Nambucca Valley for over 30 years.

Uncle Martin leads an Aboriginal dance group and family band called “Jumbaal (Carpet-Snake) Dreaming and has performed on many stages along the east coast of Australia.

Pauline is a local Gumbaynggirr woman  from Nambucca Heads. Pauline has worked with Muurrbay for 9 years, two in which she was an admin assistant for Many River Aboriginal Language Centre and seven as an active Board member.