The ancestors of the present day Yaegl people lived around the mouth of the Clarence River and spoke a language, Yaygirr that was closely related to Gumbaynggirr. As early as 1929 the linguist Gerhardt Laves was told there were only two Yaygirr speakers left. Besides possibly making contact with the Yaygirr speaker Jack Freeburn, Laves was given a valuable set of Yaygirr words by Jack Cameron though he was not able to get language from Jack’s father.

Most of the Yaygirr audio recording were given by Jack’s son, Sandy Cameron to William Hoddinott and Terry Crowley. Unfortunately, by then the language was no longer spoken right through.

There is evidence the Yaygirr had permanent settlements and a developed material culture. Matthew Flinders (1799) described large bark huts with rounded passageway entrances which protect dwellers from wind and rain. Similarly Captain Perry (1839) described canoes of a superior construction. (See Eleanor H McSwan’s ‘A history of Yamba and Iluka’)

Why were there so few speakers left by the 1900’s? The Yaegl people speak of at least one large massacre along the Clarence. Other evidence points to victimisation by farmers and disease took a heavy toll.

Besides Yaygirr proper, there were two other groups who spoke related dialects: Yirraygirr people who lived upriver of Maclean and the Yunggaya who lived around Ulmarra. The informant had known several Yunggaya people whose names Laves recorded with a cross: sadly they had all passed away.

Yaygirr belongs to the Pama-Nyungan family of Australian languages. It is one of the two Gumbaynggirric languages, along with Gumbaynggirr itself.

Yaygirr is not a dialect of Gumbaynggirr: a person speaking only Yaygirr could not have understood Gumbaynggirr, though Terry Crowley’s (1979) wordlist showed that 74% of Yaygirr words and Gumbaynggirr words are closely related. Some are exactly the same: eg, ngaluunggirr means ‘clever-man’ in both languages. Many other words are only slightly different: ‘drink’ is ngambii in Gumbaynggirr and ngabii in Yaygirr.

A notable distinction between the two is found in the many words that start with a vowel (‘a’, ‘i’, or ‘u’ ) in Yaygirr (Y), which seem to have dropped the initial consonant of related Gumbaynggirr (G) words (no Gumbaynggirr words begin with a vowel). Yaygirr words beginning with a, such as aagal, ‘sea’ have generally dropped the g from gaagal (G). However, there is usually no reliable way of telling from the Yaygirr word what its Gumbaynggirr cousin looks like.

Yaygirr has three kinds of rhotic (‘r’ sounds) one of which is probably not found elsewhere in Australia: Written with ‘rh’ it is an unvoiced trill: said like a Scottish ‘r’ but without using the voice box. People hearing the word dirha: ‘tooth’ for the first time might think they hear ‘deerssa’.

‘She’s coming to see you’

‘The Kookaburra is sitting in the tree’

Walker, Della, 1989. Me and You. The life story of Della Walker as told to Tina Coutts, Canberra: Aboriginal Studies Press

Launch of Yaygirr Dictionary and Grammar

Muurrbay and the Yaegl Elders were pleased of the launch of the Yaygirr Dictionary and Grammar at Maclean TAFE, on Friday August 3rd at 11am. 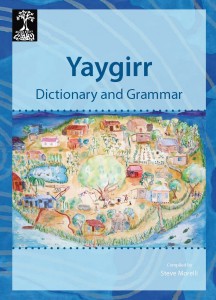 Congratulations to all involved and thanks to the Australian Government’s Indigenous Language Support program. Copies available from Muurrbay, email your order to admin@muurrbay.org.au

For many years the Yaegl Elders have dreamt of showing respect to the country of the Lower Clarence by restoring the language that this land speaks. This grammar and dictionary has been developed with extensive community consultation to support them as they revive their language and culture and pass these on to their children.

Steve Morelli is a community teacher–linguist who has worked with Muurrbay for over twenty years. His research is based on W.G. Hoddinott’s recordings, and his and Terry Crowley’s study of the language of Uncle Sandy Cameron, one of the last Yaygirr speakers. The work  has also drawn from  the knowledge of other Yaegl people and the written historical records of Gerhardt Laves and several others.

This comprehensive grammar and dictionary includes: