The Darkinyung language, my language and the language of my people was thought to have been lost many years ago along with our songs, stories and dance. This left a void in our lives and we felt incomplete not having or knowing the language of our ancestors. Fortunately with the help and tireless dedication of our linguist, Many Rivers Aboriginal Language Centre, Muurrbay Aboriginal Language and Cultural Co-operative and the Darkinyung Language Group my language has come back to life and the journey to fill this void has begun. Bronwyn Chambers Darkinyung Descendant and Chairperson of the Darkinyung Language Group (Jones, p iii)

Darkinyung is the traditional language of the Darkinyung people. It shares section names with Gamilaraay and the language from the Hunter River and Lake Macquarie (HRLM).

While it is impossible to put precise boundaries on language groups, we can speak generally. In Mathew’s (1903) account of the language, he says that the language was spoken from Wilberforce and Wiseman’s Ferry on the Hawkesbury River, to Jerry’s Plains and Singleton on the Hunter, and including the basins of the Colo and Macdonald rivers, Wollombi Brook and other streams. It is likely that there were dialectal differences within such a large region.

Darkinyung belongs to the Pama-Nyungan family of Australia languages. It is one of 35 languages once spoken in the area now known as NSW. Alternative spellings and names include: Darkinjang (Tindale 1974), Darkinjung, Darkiñung (Mathews 1903), Darrkinyung, Darginjang, Darginyung, Darkinung, Darkinoong, Darknüng, and Darkinyung. A major source of Darkinyung language is the published and unpublished materials of Robert Hamilton Mathews. This material is relatively detailed and grammatically sophisticated and is explicitly notated as Darkinyung language. Mathews’ (1903) published description of Darkinyung language would appear to draw heavily on notes and drafts of wordlists and grammatical descriptions which are found in Mathews’ No. 7 notebook (Mathews, n.d.). This notebook includes more grammatical forms and spelling variants than the published (1903) account. 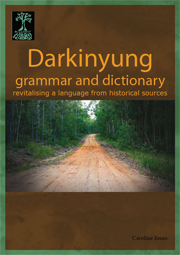 Descendants of the speakers of the Darkinyung language have a strong attachment to the language, which forms part of their cultural identity. Community members have a strong interest and awareness of language revival. There is a positive attitude to Darkinyung language revival. Since 2003 there has been a movement from the Darkinyung language group to revitalise the language. Meetings organised by Muurrbay in Wyong have been well attended and the draft documents which have been distributed have been received with enthusiasm and appreciation. The Darkinyung Language Group and Muurrbay started working with the original field reports of Robert H. Mathews and W. J. Enright. Where there were gaps in the sparsely populated wordlists, words were taken from lexically similar nearby languages2. This led to the publication of the work Darkinyung grammar and dictionary: revitalising a language from historical sources.

Darkinyung is characterised by having:

The main published texts are: Jones, C (2008). Darkinyung grammar and dictionary: revitalising a language from historical sources. Nambucca Heads, Australia: Muurrbay Aboriginal Language and Culture Co-operative. Mathews, R. H. (1903). Languages of the Kamilaroi and other Aboriginal tribes of New South Wales. Journal of the Anthropological Institute of Great Britain and Ireland, 33, 259–283. Written examples of the language Yadha gayungba. I am quite well. Wangbirang? From where (did) you (come)? Warangawi mayimbayi wurayi? When did you do it? Ngalawadhi ngiyang. We are sitting. Nganda mayimbayi? Who did that?