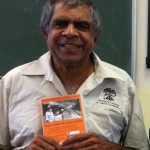 Gary was contacted by Fiona Poole of ABC’s mid north coast radio. This follows media reports by Ghil’ad Zuckermann’s on linguacide, or the loss of the world’s Indigenous languages. Of the roughly 250 Aboriginal and Torres Strait Islander languages flourishing at the the time of European settlement, only 15-20 are now alive and kicking. Gary discusses what Muurrbay has been doing to revive languages of coastal NSW.