A Language Teachers’ workshop  was held at Muurrbay 12-13 December, with Aboriginal teachers from many language groups attending, including Gathang (Birrbay, Warrimay and Guringay), Dharawal, Gamilaraay and the local Gumbaynggirr mob.

Gary Williams greeted the group in their four different languages and talked about the role of Muurrbay in language revitalisation. Julie Long demonstrated some of the techniques that have worked well in classes on the mid to north coast, including that inspired by Stephen Greymorning’s Accelerated Second Language acquisition, using pictures to stimulate and simulate real communication in the form of simple questions and answers.

The class got involved in several games including use of cards, and ‘aeroplane’ that will be useful in their work with children (adults seem to enjoy them too!). Steve Morelli demonstrated how props like a dolls house can stimualte language use, and how song can reinforce language learnt in the classroom.

Stay tuned for dates in 2014 when we will run more workshops on language teaching. Thanks to Sue from Bush Tucker Shack  for her awesome catering! 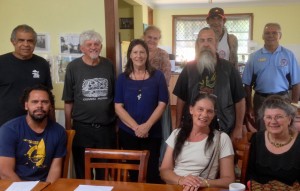 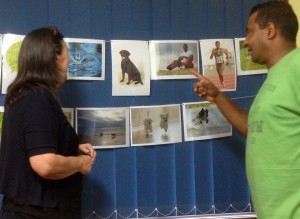