Eight young people have started an eight week language traineeship at Muurrbay.  They will build on their knowledge of Gumbaynggirr language and stories and learn about many aspects of language revitalisation such as developing children’s stories and documenting via film and sound recordings.  Liz Keen for ABC Open will be leading the film workshops and Gumbaynggirr language teacher and researchers will share their knowledge and experience.  They are pictured here in language classes:  Maxine Jarrett is introducing the Accelerated Second Language Acquisition approach that Neyooxet Greymorning shared with us.  Michael Jarrett is pictured using story telling to teach language, in this case a ghost story in which he ended up hiding under the bed!  It is hoped that some of these young people will continue to study Aboriginal languages and linguistics or film, and work in these important areas. 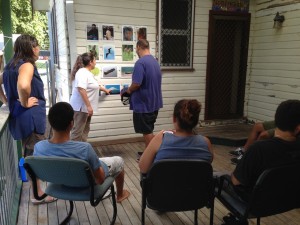 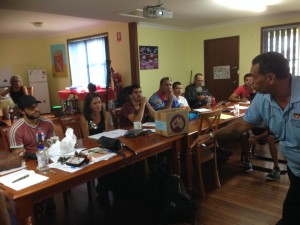